History of Our Center

“The University of Illinois at Chicago traces its origins to several private health colleges that were founded in Chicago during the 19th century…Following World War II, the University of Illinois increased its presence in Chicago by creating a temporary, two-year branch campus on Navy Pier. The Chicago Undergraduate Division primarily accommodated student veterans on the G.I. Bill. The program allowed all students to complete their first two years of study in Chicago before going downstate to finish their undergraduate degrees at Urbana-Champaign…After the war, and after the wave of returning veterans seeking education benefits under the G.I. Bill had passed through, demand for a public university in Chicago remained high. The university made plans to create a permanent, degree-granting campus in the Chicago area. The site was a 100-acre parcel at the junction of Greektown and Little Italy…The University of Illinois at Chicago Circle – named for the nearby ultra-modern freeway interchange – opened in February 1965” (Source: UIC’s website).

Shortly after the University of Illinois created it’s temporary two-year branch campus at Navy Pier, Fr. John Marren established the Newman Apostolate and served as Chaplain of the Newman Club until he became pastor of Holy Trinity Parish in the Medical Center in 1955. He was succeeded by Fr. George Malone, who served as chaplain until the Navy Pier campus site closed in 1965. The campus ministry apostolate at the Circle Campus was re-established in the spring of 1967, when Fr. Raymond B. Sullivan was appointed as the first Catholic Chaplain to the university. His appointment was due to, at least in part, to the request of a group of students under the leadership of Mr. Paul Russo, who was president of the Newman Student Organization at Circle Campus. Cardinal Cody met with the students and, at the end of the meeting, promised that he would make the appointment.

Later in that same year, the Archdiocese purchased a house at 826 S Morgan St, which served as the Newman Center until September 1980.

In 1968, Fr. Sullivan was joined by Sister Joanne Seise, S.N.D. de Namur, who became the first religious woman to work full-time in campus ministry within the Archdiocese. Fr. Michael Weston joined the staff at Circle Campus in 1975. He was succeeded by Fr. Daniel Montalbano in 1977, who served at Circle until 1980. From 1974-1979, there were six peer ministers who served on the staff at Circle Campus: Roberta Homan, Paul Stewart, Bob Salter, Jack Butler, Peg Hanrahan, and Vincent Barlowe.

In 1979-1980, the land of the current location of the Newman Center (700 S Morgan St) was purchased by the Archdiocese and the Center was built as a lasting memorial of the visit of his holiness, Pope (now Saint) John Paul II, to the Archdiocese of Chicago on October 4th-6th, 1979. During that visit, the Holy Father gave his consent for the Center to bear his name, and the dedication stone (located in the entrance way of the Newman Center) was used in the altar erected for the papal Mass offered in Grant Park on October 5, 1979. The Newman Center was officially dedicated on October 22, 1980.

Numerous priests, lay ministers, and students served the Newman Center community in the new location at 700 S Morgan St from 1980 to 1991.

Fr. Patrick Marshall was appointed by Cardinal Bernardin as the Director/Chaplain of the John Paul II Newman Center in July 1991 and served as the Director/Chaplain for 27 years (1991-2018). During those 27 years, the Newman Center experienced several slight name changes, as John Paul II moved from venerable to blessed and, finally, to saint in April 2014, thus giving the Center its permanent name.

The University of Illinois at Chicago has over 33,000 students with about 1/3 of those students self-identifying as Catholic (*data collected from a Religious Preference Survey distributed to all incoming students during their Orientation*), which gives UIC the largest Catholic student population in any university in the Midwest. 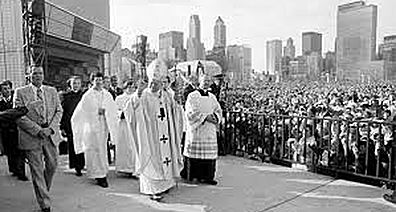 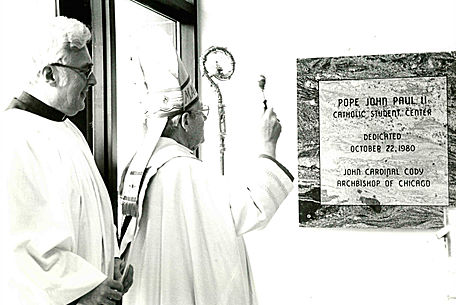 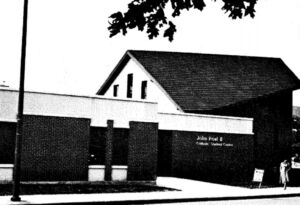