An Interview with Fr. Patrick Marshall 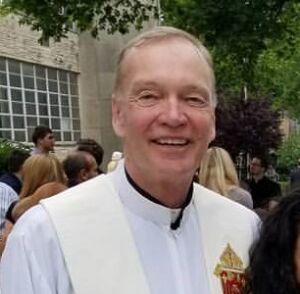 Becca Siar: How did you end up at the Newman Center back in 1991?

Fr. Patrick Marshall: “Well, at the time, I was a parish priest and also served as one of the Master of Ceremonies for Cardinal Bernardin. He asked me to go to the University of Notre Dame to participate in a program for church leaders, and while I was there, the University offered me a job. I had to come home to ask for permission [since it was in a different state/diocese], and Cardinal Bernardin said that if I really wanted to go, he would release me. However, he told me that he was going to have an opening at the University of Illinois in the next nine months, if I was interested. I thought to myself, ‘Well, I am a Chicago priest, so I should serve in Chicago.’ So after those nine months, I ended up at the Newman Center.”

How did the Newman Center change in your 27 years as Chaplain? How did campus change?

“When I first got there, there were basically two campuses: one at the Medical Center (the West Side) and one on the East Side. There used to be a parish on the West Side that oversaw ministry over there, but it was suppressed (I think around 1989). So, we started taking responsibility for that ministry when I started working at the Newman Center. The neighborhood was dangerous at the time; there was a lot of crime. We were also only open from about 9:00am-4:30pm because the East Side was virtually all commuters. They actually built the first dorms on the East Side — on the corner of Harrison and Halsted — during my first couple of years at Newman. Before that, some students lived on the West Side, but they were all Health Science students who were pretty busy. Gradually, the neighborhood changed, but students were still afraid to stay around campus. They would go to class and then leave right away, which really affected our ministry because we only had the six to eight hours each day to work with. A big change came around ’97 or ’98. On Sundays, we used to just have an 11:00am Mass, but we decided to add a 7:00pm Mass on the West Side and a 9:00pm Mass in the dorms on the East Side. Eventually, the students were the ones that wanted Mass brought back to the Newman Center’s Chapel. Another big change we noticed was technology. When I got there, the Newman Center had one computer, which was a giant box that nobody knew how to use. We had a student priest on staff [at the time], so he was the one who taught me how to use it. He set up my first email address for me, which was jpii@uic.edu. So computers were a new thing, and cell phones were non-existent — much different than today.”

What was your approach to campus ministry through the years? What are some common threads you saw throughout an entire generation of college students and their engagement with the faith?

“I had a mentor at the University of Kansas, who I used to go see about once a month — Msgr. Vince Krische. He had been there for 28 years and really built a great program. He taught me that campus ministry had to be both educational and pastoral because you’re working in the world of higher education. So over the years, we developed the Integritas Institute, the School of Catholic Thought, and the Catholic Studies minor at UIC — all of which were institutionalized. With the students, some were devotional Catholics, having been brought up in the Catholic culture, but that was already starting to disintegrate in Chicago. You basically had “elective” Catholics, or those who chose to come to church. Students, at that age, are trying to figure out who they are, who they are in relation to others, who they are as sexual beings, what is their relationship (if any) to God, and what is their relationship (if any) to the Church. Those things were consistent during my time there, and I think continue to be — even today. Vocations were also always a big deal for me. I think there have been eight men who have been ordained to the priesthood and four that have entered the religious life from the Newman Center, and there are a few who are still in studies. I’m very proud of those men and women who discerned those vocations.”

Not to mention all of the vocations to marriage and lay ministry, too! And the fact that their participation in the Newman Center, especially through your educational and pastoral ministerial approach, helped form them to be better ministers, better spouses, better Catholics in the world.

“Oh yes! I have done hundreds of weddings all over the world for former UIC students who were involved at the Newman Center and also many baptisms of their children. There are some former students who are lay ministers in campus ministry and youth ministry. I loved watching young people grow up, knowing that I had been a part of their life. It’s been a great privilege of mine to marry them, baptize their kids, or go to their ordinations. The Newman Center was a great place for vocations, and I hope that continues.”

Do you have any words of wisdom you’d like to share with our current and future UIC students?

“I think of St. John Henry Newman’s motto “cor ad cor loquitur” often — “heart speaks to heart.” That’s the message I always wanted to get across during my 27 years at UIC. God does not call us to perfection, but He asks us to speak to the heart of each other and to accept each other’s heart, even though we might have wounded hearts. I hope that we can continue to promote that at the Newman Center, letting heart speak to heart, and ultimately letting students discover the Sacred Heart of Jesus.”