Love In The Air (At Newman)! 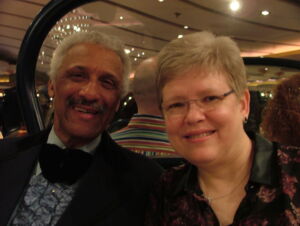 Herschel D. Wallace III (Class of ‘71) and Gale Warton (now Wallace; ‘79) met at a student-run orientation event called Freshman Weekend for incoming freshmen of the (then) 100% commuter campus. “Freshman Weekend would happen at Camp Duncan, and we would have several activities,” Herschel explains. “So when classes did start, there would be someone on campus that you would recognize.” Gale decided to go on the weekend as a freshman, only to find Herschel as the keynote speaker. “I guess we caught each other’s eye,” she says.

At the time, Newman was the 2nd largest student organization. “Herschel and I started to meet often at Newman’s parties,” says Gale. They dated for a while, broke up, and then started dating again a few years later. But Herschel said he didn’t want to get involved with Gale again unless she was serious and wanted to get married. “I told him that I needed some time,” Gale explains. “But then one day, we were headed to Mass, and I just said, ‘You know what, Hersch? I’ll marry you.’ That’s how I remember it.” 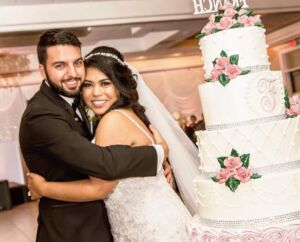 Donald Franch (‘19) met Gaby Hernández (now Franch; ‘18) in a UIC dorm. “He was wearing a West Chicago shirt, which is where I went to high school,” Gaby says. “So I said to him, ‘You went to West Chicago? I went to West Chicago!’ I invited him to my dorm room because he was an engineering major and my roommate was also studying engineering, but he didn’t come up until like two weeks later.” “I had to build up the courage to go up to these girls’ room,” Donald explains. “He finally came up one day and knocked on our door…That’s kind of how it started. I was already involved at Newman, but Donnie wasn’t since he wasn’t Catholic. So I invited him to Newman for one of the Newman Nights.”

That Newman Night led to another and then another, followed by a retreat and a Bible study. Before long, Donald began to get to know several students in the Newman community and began attending RCIA classes to become Catholic. “When we met, I was actually dating someone else,” Gaby shares. “So our friendship started right away, and you could just tell that there was just something different about him. I saw qualities in Donnie that I hadn’t seen in my previous relationship, and I knew that those were good qualities to have in a future husband.”

Donald’s advice for current students is to enjoy every moment. “I often just wanted to be done with college in general; with all the homework, exams, and studying, it’s tough sometimes. But you’ll never get to go back to those times when you’re in class with friends or hanging out together at Newman. Make sure you are there to make the most of it because it’ll go by fast.”

“Newman, for me, has created lifelong friendships,” advises Gale. “Utilize Newman as you are on your faith journey. There are no better people to make friends with.”

“Love is something that no one totally understands,” explains Herschel. “It’s a powerful emotion, but it is a decision and a commitment. In really tough times, you’re going to need some basis to go on.”

“Love is a choice,” says Gaby. “It’s not just about you and how you feel, but it is a lot of sacrifice. It’s a journey, and with God’s grace, we’re going to make it.”