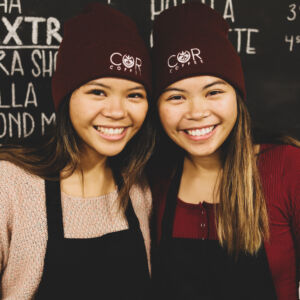 Last year, Abi and Ame traded sun and sand for snow and wind when they left southern California to begin their college experience at UIC. After playing volleyball together since age four, they found that UIC offered the best opportunities both on and off the court, and, most importantly, they could continue playing volleyball together at the elite level. What they didn’t realize, however, was just how much the Newman Center would become their “home away from home.”

“I started coming to Newman because I liked the community,” says Abi. “I wanted to find a new family, and it helped that the Newman Center is so close and convenient.” Both found that new family as they joined a Bible study and started learning more about their faith. “I used to just go through the motions, but I never actually took anything in. Now I’m striving to make God the center of my life because I’m starting to realize just how much He loves me.” But the twins aren’t just regular Bible study attendees. It’s not uncommon to walk into Cor any day of the week and see at least one of them working on her class work or studying with her “Newman family.” In the midst of their hectic lives as student-athletes, they’ve also both volunteered to serve as baristas. When asked why, Ame says “I like meeting and serving new people, and it’s a chance for me to do that,” and while Abi agrees, she also adds “I like the challenge of perfecting a new skill like steaming milk to the perfect consistency for a latte. It’s cool to get to serve people through a good cup of coffee.”

Both Abi and Ame contribute a lot to the Newman Center- not only the time serving as baristas, but also their joyful and energizing spirit. They both attribute it to gratitude for what Newman has given them. “Because of Newman, I’m more aware of God in my daily life and my life is different because I know I am a daughter of Christ,” says Abi. “Even in volleyball, I’m able to be more patient with myself because I know it’s not my skills that define me, but God’s love for me.” Ame echoes the same thing. “Because Bible study helped me realize my identity as a daughter of God, I am able to see volleyball as a way to glorify God, instead of being so focused on whether or not I was getting the glory I want. Now, I love volleyball even more because I know that when I play my best, I’m giving God all the glory.”